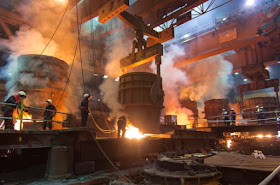 Details of a plan to merge the South Yorkshire-based Speciality Steels business of Tata Steel with Sheffield Forgemasters have been reported.

Sky News is reporting that the "audacious plan" is part of an attempt by venture capitalist, Edmund Truell, the pensions and investment adviser to Boris Johnson, to become the trustee of the British Steel Pension Scheme (BSPS).

At the end of 2016, eight months after Tata announced their original intention to sell its UK steel assets, the firm made a commitment to secure the future of jobs and production at Port Talbot and other steelworks across the UK. It also reached an agreement with trade unions and began consultation with its employees on a proposal to close the British Steel Pension Scheme to future accrual.

The latest reports point to Truell, who was putting together a plan for Tata's UK assets last year, and other pensions experts questioning the viability of Tata's pension plan and bosses' hopes to merge European operations with Germany's Thyssen-Krupp "because it will leave the steelworkers' scheme without a sponsor."

Advertisement
Sky News states that a revamped offer from Truell "refers to an audacious plan to ‎merge Tata Steel's speciality unit with Sheffield Forgemasters, an advanced steel materials business which has been struggling to address doubts about its financial future.

"Mr Truell's charity would then provide £200m of additional investment into the combined group, while taking on responsibility for the Tata Steel UK pension liabilities."

The plan would be an alternative to the proposed acquisition of the Speciality Steels business by international industrials and metals group, Liberty House for a total consideration of £100m. Tata and Liberty entered into exclusive negotiations in November and hoped to conclude the deal "early in the first quarter of 2017."

Tata's Speciality Steels business, which has a £275m of turnover and is Tata Steel Europe's only Electric Arc Furnace (EAF) based business, specialises in carbon, alloy and stainless steels for demanding applications like aerospace, motorsports and oil and gas. Until recently, it employed over 2,000 people at sites like Aldwarke in Rotherham and Stocksbridge in Sheffield.

Sheffield Forgemasters International Ltd (SFIL) is the world's only independently owned forgemaster and operates in sectors including defence, offshore oil and gas, civil nuclear, materials processing and power generation and is a world leader in the advancement of large forging and casting technologies.

Advertisement
Former Corus CEO, Tony Pedder is chairman of the Forgemasters group. He also co-founded Albion Steel with Dr. Rod Beddows, a strategy consultant who advised Tata Steel on the acquisition of Corus to create the world's fifth largest steel company in 2006.

Albion Steel was in the running to take on Tata's Speciality Steels business and planned to create "an innovative structure which may potentially include other metals producers in the region."