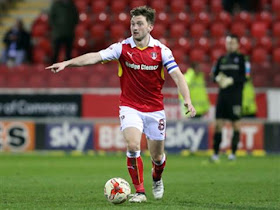 An increase in wages and administrative expenses meant that Rotherham United posted a loss in its most recent financial accounts, but retaining Championship status for this season is likely to have boosted income.

The borough's football league club has posted its results for the year ending June 2016 having switched its reporting year to tie in with the football season. It shows that turnover has increased to £13.3m but a loss before tax of £1.48m was recorded.

The financial period relates to The Millers late run under the leadership of manager, Neil Warnock, to secure Championship status. The club's turnover, which has increased from the £10.98m for the year to December 31 2014 (which included promotion to the Championship) is made up of increasing levels of commercial income (£4.9m) and "central distributions" (£4.8m).

The financial performance is linked to the on pitch performance of the team and the reported loss is mainly due to an increase in wage levels, up from £4.8m in 2014 to £8.8m in 2016.

The results also show that ASD Lighting put in some £2.9m to the club in the year ending June 2916 in the form of sponsorship. Chairmanship Tony Stewart, is the successful local businessman and owner of Rotherham lighting manufacturers, ASD Lighting. He saved the Millers in 2008 when he brought the then League Two club out of administration via a Creditors Voluntary Agreement.

Advertisement
For the same financial period, ASD Lighting Holdings, the holding company of the football club and ASD Lighting, posted turnover of £30.4m, £19.9m for the lighting business, and a loss before taxes of £774,000. The company has invested millions in recent years at its barbot Hall facility to increase productivity and product quality.

Matchday income and season tickets boosted club coffers by £2.45m with average attendances at the £20m AESSEAL New York Stadium continue to be above 10,000. Around 6,000 season tickets were sold.

The report said in its strategic report that "Ticket and commercial revenue streams both remain satisfactory and the club continues to look for and develop new commercial opportunities."

Since the end of the financial year, new tenants have taken up space in the New York Stadium, a new principal shirt sponsor was announced and this season saw the biggest ever TV deal come into play for the Premier League. For previous seasons, Rotherham United will have received between £2m and £3m in solidarity payments from the Premier League but from this season, these are estimated to jump to between £6.5m and £7.5m.

In a league alongside former Premier League and European Cup winners and clubs benefiting from huge parachute payments where Financial Fair Play rules have been loosened, the Millers currently find themselves adrift at the bottom of the league.