Rotherham United bosses have provided an update on the regeneration of the former Guest & Chrimes factory that remains vacant alongside the club's £20m AESSEAL New York Stadium.

On the edge of the town centre, the area is seen as a key development site in the latest Rotherham town centre masterplan and whilst the community stadium opened in 2012, plans to demolish the foundry to make way for new schemes stalled after English Heritage (now Historic England) strongly objected to the idea.

The Grade II listed buildings sit between the stadium and the council's offices on Main Street and have been empty since 1999. Consultants for the club, Gleeds, estimated that it would take an investment of £8.8m just to bring the current property up to a marketable condition and said that there had been little interest from developers in doing so.

Advertisement
At a recent fan's forum, Tony Stewart, chairman of Rotherham United, gave the latest on the situation after the masterplan outlined the aim to create a focus for recreation and sporting activity in the town.

Stewart said: "We have a leisure company who want to invest their time and resources into the Guest & Chrimes building. The potential investors are a trampoline centre which would be the largest in the UK. I think it would be good for town.

"We have got a good relationship with English Heritage. It is a Grade 2 building, we have had many positive meetings."

A further announcement is expected around Christmas. 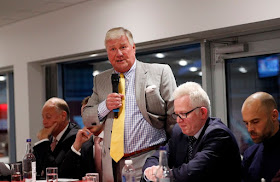 Opened in 1857, the history of the works is of national and international significance due to the role of the Guest & Chrimes business in pioneering the design and manufacture of brass valves and screw-down taps across the world.

Rothbiz understands that Heritage England are keen to retain as much of the buildings as is possible but they can accept significant change provided the conservation and interpretation of the site and its history through redevelopment conveys the significance of the previous use of the riverside area.

The masterplan, which was recently adopted by the Council, said: "Although the buildings are not in themselves unique or architecturally "stunning" their arrangement and functionality provide a clear visual language for how a founder and brass works from this period were composed.

"The building's significance is described by Historic England and these features should be reflected in the proposed scheme for the site, presently being progressed by Rotherham United.

"Historic England has been involved fully with the development of the masterplan. Their approach is positive and flexible and their key requirement is that the proposals "conserve and enhance" the significance of the buildings and its unique social history through a strong and robust conservation.

"The story of Guest & Chrimes needs to be told to the people of Rotherham. Historic England have stated that with the "right" conservation approach they will be quite flexible in terms of redevelopment."

Advertisement
A cgi was produced by masterplan consultants, WYG to show how the Guest & Chrimes site might looked when developed (top).

The site was purchased by Rotherham Council for £2.6m from developers, Evans in 2010 and is now controlled by the football club which has a very long lease from the Council.

The masterplan adds: "The works are affected by flooding constraints with the original buildings set 2m below the stadium and Riverside House which are designed to reflect the area being within flood zone 2. Redevelopment proposals must address this constraint through creative design and conservation."

£2.2m of funding was identified by the Council last year to carry out flood alleviation works in the area.

Andrew Clarke, a project director at WYG who worked on the masterplan and originates from Rotherham, believes that the water tower that displays the Guest & Chrimes name is the most significant element of the building and serves as a landmark from the town centre.

Clarke said: "The water tower should be retained and enhanced. Proposed development should also reflect the rhythm of the existing building, along with the scale. The detail along the front range is important, including the gateway entrance which creates a distinctive waterside frontage. The three internal ranges are of merit and the central of these with its "rounded" gable is noteworthy.

"As many of these features as possible should be retained or incorporated, but it is recognised by all that change and some demolition will be necessary to deliver a viable and deliverable scheme."